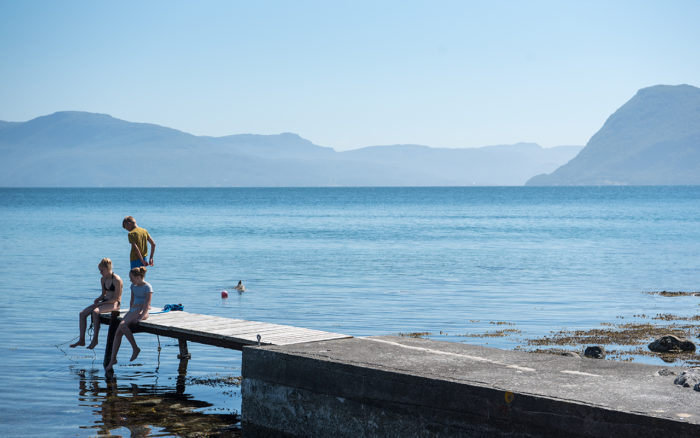 Norway is a long and jagged country, ranging from mild 58 degrees north to arctic 71 degrees – far north of the polar circle. If you put a needle in Oslo and rotate the country around, the northernmost point ends up as far south as Rome in Italy.

The Gulf Stream brings warm water northwards and makes the climate milder than the latitude indicates, especially along the western coast.

In the middle of winter, the average temperature is a few degrees centigrades above zero along the coast in the south. Even in the north, it is usually not colder than between minus two and minus five degrees. Summers are mild, with temperatures normally ranging between 15 and 20 degree centigrades in the south, and 10 and 15 degrees in the north.

From the ragged western coast, the landscape rise up to high mountains. These act as a wall protecting the eastern inland from the low pressures roaming the North Atlantic. This makes the eastern part of the country dryer, the summers a little warmer, and the winters colder.

Into the history books

Many travel to Norway in the summer because of the mild climate, seeking escape from the heat further south in Europe. This year they fouled.

The Norwegian summer of 2018 goes into the history books. The weeks from the beginning of June to the end of August were the warmest ever recorded in the south of the country.

– We talk about measuring ranges that run between hundreds and two hundred years back in time, says Roar Inge Hansen, Meteorologist at StormGeo.

The summer was not only hot, it was one of the driest ever in the south of Norway. During July, Oslo got a meager 16 millimetres of precipitation, Kristiansand on the southern coast only 8, Stavanger on the southwestern coast 17 millimetres. All less than ten percent of the normal amount.

The rest of Norway was also warmer than usual this summer, but not as exceptionally hot as the southern and eastern parts.

The contrast to the cool and wet summers of 2015, 2016 and 2017 was huge, but that is not the only thing that makes Norwegians remember this year’s summer extra well.

– We were gifted with a bonus summer in May, before the actual summer started in June. It was record-hot throughout the country, over 30 degrees centigrades both in western Norway and in eastern Norway, Hansen says.

If May is included in the statistics, the summer of 2018 was the hottest ever recorded in southern and eastern Norway. It was the second warmest in western Norway, and the third warmest in central Norway.

The hot and dry weather was nice, but had its price. The drought destroyed the crops in much of southern Norway, and the water reservoirs emptied. Farmers could not feed their animals and many had to slaughter parts of the livestock.

Numerous and large fires scorched forests, bush- and grassland. Along the southern coast of Norway the oak-leaves turned brown and dry, and made mid-August look like autumn.

The warm and beautiful weather continued in June, and many feared that we would «spend the summer” before the school holidays had begun.

– The Norwegian “rain-capital” Bergen on the west coast, was three days from breaking the record for number of days without a single drop of rain. The record is 28 days, set as far back as 1913, says Hansen.

However, on June 11, the rain came back to Bergen, and in western Norway the weather was close to normal the rest of June. There were no relief for the south and eastern parts of the country, the warm and dry weather percisted all month.

June and the first half of July is an example of the huge contrasts in the Norwegian weather.

While southern Norway had one of the hottest and driest summers ever, northern Norway were burdened by one of the coldest and wettest early summers this part of the country has ever seen.

Tromsø set a new rainfall-record for June, and it hasn’t been colder in June since 1993.

– The heat finally came to northern Norway as well. July 16th the weather turned, and the temperature jumped to over 30 degrees, even on the coast, says Hansen.

Those who feared that the summer weather was all spent in June was wrong. In Oslo, July ended up being the warmest since 1901.

– In Oslo the temperature rose to over 25 degrees every day of the month, except one. Nine days were warmer than 30 degrees, says Hansen.

Both Oslo and Bergen did set new all time high temperature records, with 32.6 degrees and 34.2 degrees, respectively.

– The most unusual in July were the hot nights, even far up north. June 19th, Makkaur lighthouse, on the coast north of Vardø in Finnmark, ended up having the second warmest night ever measured in Norway. The temperature never fell below 25.2 degrees, says Hansen.

This is only 0.3 degrees below the national record, set in Halden in the far south in 1933.

On the night of July 28th, the temperature never fell below 20 degrees at around a quarter of all Norwegian weather stations.

From August 3rd it gradually became cooler and wetter in most of the country. The exceptions were still the southern and eastern parts.

– Eastern Norway ended up with an average temperature of one to two degrees above normal in August, and could note 20 days with temperatures over 20 degrees, Hansen says.

– And that is scary

It is not only the summer that makes 2018 stand out. The winter was also different, cold, and dry, and the autumn record wet.

Farmers who saw their crops dry up this summer now had to cope with flooding ruining the grass they managed to save, and leaving the fields full of sand and gravel.

– We have had the wettest early autumn in more than 150 years, says Roar Inge.

One odd year does not scare Roar Inge, variation from one year to the next is normal. Having really warm and nice summers in between ordinary ones are normal. What really scares him is the trend.

– What I’m scared of is the trend in the warming, and the trend of wet years. In this part of Norway the increase in precipitation the last 30 years is almost ten percent, and the temperature has increased about one degree centigrades. We have to go back to 2010 to find a year with lower monthly temperatures than the normal. And that is scary, Roar Inge finishes.

Scary or not. Nice summers are to be enjoyed. This summer Roar Inge fulfilled an old dream. He finally visited Lofoten, a beautiful string of islands curving into the North Atlantic way up north.

– The weather in June was very bad in the north, cold and wet. But it changed June 16th, the day I came to Lofoten. The next days it was fine sunny weather, the temperature rose above 20 degrees, and we had over 30 degrees while I visited, a new record. When I left on the 22nd it started to rain again, so I was very lucky, Roar Inge smiles.

This article is written by Scary weather for StormGeo